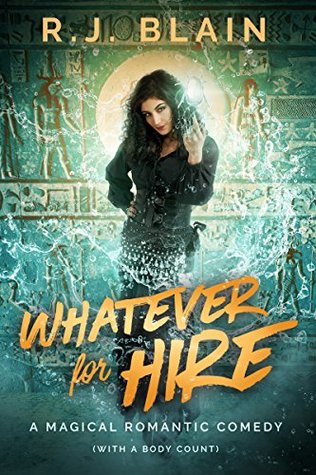 Review: Whatever for Hire

Fetching a cat out of a tree should’ve been a quick, easy fifty bucks in Kanika’s pocket. Instead, following one stray thought, the devil pays her a visit and leaves her with a debt to repay.

Owing the devil a favor is bad enough, but her life is turned upside down when it’s time to pay the piper. First, she doesn’t want the world’s sexiest firefighting, kitten-rescuing Scot as an unwilling companion. Since that wasn’t bad enough, she doesn’t know who wants him dead or why, but there’s no way in hell she’s going to let someone mar his perfection.

Add in the fact the devil wants an heir, and there’s only one thing she knows for certain: she’s in for one hell of a job.“

I must say, if I had done a “First Impression Friday” on this book, I would have had a prediction wrong based on how I understood the “heir” in the synopsis would play out. I was pleased to find that it was a pleasant surprise that I had not accounted for.

There were a lot of things happening at once and I found the numerous characters to be difficult to follow at times.

I also was not a huge fan of the protagonist’s personality, but that is a personal preference. It didn’t help that I felt that she was always trying to validate herself and her choices (both with her body and making her actions seem like she was the only reasonable woman on the planet because of her skills…and then flip-flopping to say the opposite). I don’t like how she let herself be treated and perhaps it was the time period I was reading it, but I just don’t like how women were portrayed.

The mythology, religion, and fantastical world in a contemporary realm were entertaining and I enjoyed reading it.

I read this because it was on sale on kindle and grabbed my attention. I like romantic comedies and I like magic and fantasy. It wasn’t mind blowing, but it was a light read for someone looking in that direction. I haven’t read the books before it in the set, but I imagine that it doesn’t change too much as this book seemed like it could be a standalone story. I’m unsure if I’ll read any more in the series, but I don’t regret reading this one, it was a fun distraction from my profession.

“With a Body Count” is a part of this book’s series title. I didn’t find it incredibly gory or deadly, although the profession of “kidnapper” and the assassins provide dead people. There are also people that are deceased but still alive in “Whatever for Hire”. It wasn’t suspenseful and full of dead bodies like I imagined (few things were described and people weren’t being killed all of the time), but a lot of people did die…

As for romantic comedy, it wasn’t laugh out loud funny or incredibly feel good with tons of cringey awkward that I like, but it was good.