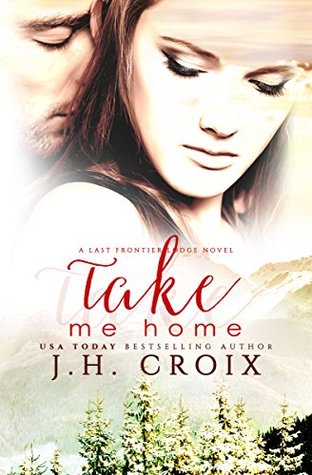 “From Bestselling author, J.H. Croix, a new contemporary romance series! A sexy Christmas romance set against the wilderness and beauty of small-town Alaska. Gage Hamilton is a smoldering Navy SEAL and a man on a mission. He’s returning to Diamond Creek, Alaska to resurrect his dream of reopening Last Frontier Lodge. Marley Adams moves back home hoping to find a sense of security and safety after it was stolen from her.

Gage has spent many years successfully avoiding emotional entanglements. He is looking for nothing more than peace and sanctuary at his family’s old ski lodge. His new neighbor, Marley, was definitely not part of his plans. Marley is a brainy computer whiz and way too sexy for Gage’s own good. A man who prides himself on always being in control, Gage finds that he has little when it comes to Marley.

Marley only wants to get her feet back under her after her world was turned upside down in Seattle. She’s been focused on little else beyond her work and is seriously out of practice with anything resembling romance…including the scorching hot attraction that sizzles anytime Gage crosses her path.

Gage and Marley are powerless against the magnetic pull between them. Steamy and snowy nights weave a spell around them. While Marley thought she escaped whoever set out to hurt her in Seattle, she finds the threat of danger has followed her to Diamond Creek. Gage must face the depth of his feelings for Marley when he realizes he will do anything to protect her. Can Marley and Gage discover love in time for Christmas? The magic of a white Christmas is right around the corner.

*All novels in this series are full-length standalone novels with an HEA.”

I was overall pleased with this story. The characters were believable and they had real struggles. They communicated well and the rifts in the budding relationships weren’t caused by confusion or not being on the same page. In fact, it was mostly external factors that gave them issues, which made them more likable as it wasn’t their own traits that made them frustrating. They developed over the course of the story and I found it interesting that they carried a lot of the same self-doubt and low self-esteem. That goes to show you that no matter how someone seems to be on the outside, they may be just as likely questioning themselves the entire time.

There was ample suspense and thought the main climax was going to take a different direction from the get-go. It was nice to see it occur somewhere I didn’t expect (although somewhere likely and predictable to others).

The story itself was a little cliché and once the relationship was started there were descriptive romantic scenes almost every chapter. That got kind of old, but fits with the genre and would only be problematic to people that don’t like the genre to begin with (which isn’t the intended audience, obviously…).

It was set in Alaska, which as always is my new obsession…so I LOVED THAT. There were little descriptors about travel to and from that really hit home and were realistic. (However, my travels are a little more extreme and remote as we aren’t connected to the road system.) I could have done for more outside adventures and animal encounters, but it wouldn’t have suited these characters as much as building the foundation for the rest of the series did.

I’m looking forward to the rest and already have book two downloaded! (Both book one and two are free on Kindle!)